Stratstone Land Rover Stockton is pleased to announce that two team members have endured the elements to raise over £2,500 for charity.

Cycling 'coast-to-coast' across the UK in just two days, David McIntyre, Head of Business, and Eric Redpath, Regional Manager, raised funds for the Born Free Foundation as part of the JLR World's 'Kenya Do It' challenge.

The two-bike convoy, along with their Land Rover Discovery support car, set off on February 27th just after 9am and ended their journey before 4pm the following day. Over the weekend they reached the Hartside summit, battling through snow and sub-zero temperatures at an altitude of over 1,900ft.

The 142 mile cycle took them across the UK, from westerly Whitehaven to Sunderland's east coast, where their fundraising efforts ended in beautiful winter sunshine at the Roker Pier Whitehouse.

David comments: "Although somewhat tender, I am delighted to say that I survived the challenge! We were really lucky to have some good weather over the two days, and it only snowed twice. The route itself was torturous at times, particularly the climb to Hartside summit at the end of the first day but it was all for a good cause! I just wanted to say a huge thank you to everyone who has supported and sponsored me for my Coast to Coast cycle."

The money raised by the duo will go towards the work the Born Free Foundation does to halt the extinction of animals, by protecting rare species in their natural habitat via education and animal rescue. 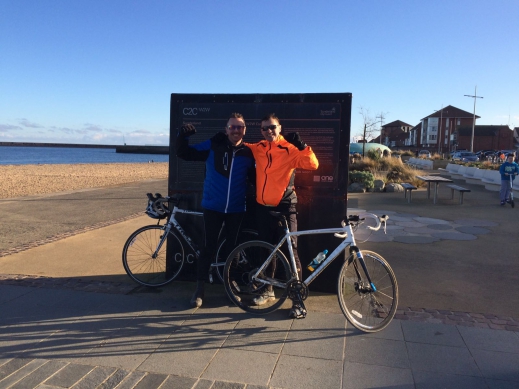